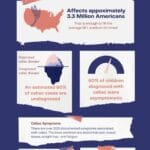 Awareness of celiac disease and concerns about reactions to gluten and wheat-containing products have increased in recent years. But confusion remains about the causes and differences between celiac disease, gluten intolerances, wheat allergies, and the overall trend in gluten-free product consumption.

While the symptoms for both conditions are similar, they are two very different medical conditions. Celiac disease is an autoimmune condition where gluten causes an immune response of inflammation in the small intestine.

This should not be confused with a wheat allergy. Wheat allergies are specific to wheat and not all gluten-containing grains. The symptoms are different from celiac and similar to other food allergies. Symptoms occur when a person eats wheat or wheat-containing products or inhales wheat flour.

The history of celiac disease can be traced back to the original agricultural revolution over 8,000 years ago. As human diets begin to expand from hunter and gather to domesticated livestock and cultivated crops most were able to adapt.

However, those humans who were not able to adapt show the first cases of food intolerances including celiac disease. In fact, a 2008 archeological dig unearthed remains from the 1st century AD which showed, using genetic testing, the presence of the celiac gene HLA-DQ2 along with malnutrition damage typically associated with celiac disease.

But it isn't until the 1940's that Dr. Willem Dicke hypothesizes that wheat protein may be triggering celiac, and a wheat-free diet is first developed. In the 1950s, Margot Shiner was able to link celiac disease to damage in the small intestine.

In the 1960s the first antibody tests were developed followed by genetic marker identification in the 1970s and 1990s. There are two markers identified, HLA-DQ2 and HLA DQ8.

While clinical trials are underway, there is no known cure for celiac.

Celiac disease (diagnosed) impacts 1% of the population in the United States, about 1 in 133 Americans. (3 and 4)

Celiac disease is under-diagnosed with an estimated 15% to 20% of the affected population formally undiagnosed. (3)

Mass screening programs in countries like Italy and Finland show rates of 1.^% and 1.99% of the population respectively. (5)

20% of those with Celiac disease are unaware they are affected. (3)

60% of children diagnosed with Celiac were asymptomatic. (13)

41% of adults diagnosed with Celiac were asymptomatic. (13)

Between 10% to 20% of first-degree relatives of patients with celiac disease have also evidence of the disease. (12)

2.6% of those testing positive for Celiac have a second-degree relative who have celiac. (13)

There are over 200 signs and symptoms related to Celiac. (13)

Self-reported rates of gluten and wheat sensitivity are as high as 13% of the U.S. population. (11)

The average time to resolution for adults is 6.5 years. (8)

The annual growth of the gluten-free food market is 6%. (2)

9% of meals prepared at home in the U.S. contain a labeled gluten-free product (7)

There are over 2,000 gluten-free labeled food products available in the U.S. (13)

30% of Americans are attempting to eliminate or reduce gluten in their diets. (10)

27% of Americans reported specifically purchasing a gluten-free product in the last 3 months. (15)

In the U.S. gluten-free labeled foods do not have to be entirely free from gluten, just less than 20 PPM (parts per million). (14)

What is Celiac disease?

Celiac disease is a genetic autoimmune disorder that causes damage to the small intestine. Having the two identified genetic markers is not a guarantee that the individual will actually develop celiac.

Gluten is a protein found in grains including wheat, rye, and barley. It is also found in triticale, malt, brewer's yeast, and wheat derivatives such as spelt, farro, farina, and wheatberries.

What is gluten sensitivity?

Gluten intolerance or sensitivity is a condition where the person experiences negative symptoms after ingesting gluten. Unlike celiac disease, there is no damage to the small intestine.

My name is Jen and I am the recipe developer, writer, and photographer around here. Since being diagnosed with celiac disease over 10 years ago I have been slowly curating a recipe box full of gluten-free goodness. I adore vegetables, crave chocolate, and I am always up for an adventure.