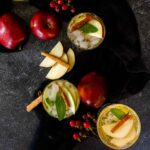 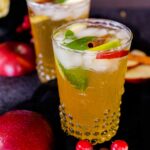 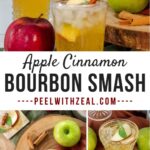 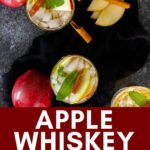 A new take on the classic whiskey smash cocktail, our Apple Whiskey Smash is perfect for Autumn. Use your choice of whiskey or bourbon, a quick and easy homemade cinnamon simple syrup, and sparkling apple cider for the perfect whiskey cocktail.

Please read the entire post for tips and tricks to ensure a perfect recipe every time. And don't forget to tag @peelwithzeal on Instagram so we can admire your creation!

A smash cocktail is one that muddles fruit with herbs, traditionally lemon and mint, but can be made to fit every season. This is why we love this recipe for Fall. That and all these reasons...

If you like our mezcal mule cocktail, you are going to love this Apple Cider Whiskey Smash!

I used Bulleit Rye Whiskey for this recipe but you can use any whiskey, rye, or bourbon.

You can also use applejack, a spirit derived from apples, not to be confused with apple whiskey which is apple liquor and whiskey mixed together. I find apple whiskeys too sweet, but you can try them if you like!

I highly suggest avoiding other flavored whiskeys like Screwball or Fireball. Their strong flavors will overpower the apple.

In addition to your whiskey of choice you will need:

🥃How to Make a Whiskey Smash

We are going to start by making the cinnamon syrup so it can cool while we make the rest of the cocktail.

All simple syrups are made by mixing water and sugar in a saucepan heating over medium-high heat until the sugar dissolves.

Bring mixture to a simmer, add in the cinnamon stick, and stir occasionally. It'll take just a few minutes to make sure the sugar dissolves.

Remove from heat and let cool completely. Strain or remove the cinnamon stick.

This recipe will make more cinnamon syrup than the cocktail calls for. The remaining syrup can be stored in the fridge for several weeks. All the more reason to make more apple cocktails!

Step 2- Muddle the Fruit and Herbs

Strain into a rocks glass over fresh ice. Whiskey smashes are typically served over crushed ice but cubed ice is fine.

🍾Whiskey Smash for a Crowd

This smash cocktail recipe can be easily tripled or more. And it is perfect for making ahead.

My best tip for make-ahead smash cocktail is to combine all the ingredients EXCEPT for the sparkling apple cider in a blender. Pulse a few times but DO NOT puree the fruit. We just want to break it up a bit.

Use a fine-mesh strainer to strain into a pitcher. Chill until you are ready to serve. When serving pour over crushed ice and top with the sparkling apple cider.

You can also serve this whiskey smash cocktail as a punch. Add your chilled and strained cocktail to the punch bowl. Add the apple cider and slices of apples and cinnamon sticks for decoration.

And if you are looking for more crowd-pleasing drinks, check out our 5-gallon homemade hard cider recipe!

How do I make crushed ice?

You can make crushed ice by placing your ice cubes in a freezer back and beating them with a rolling pin. Alternately, if you need crushed ice for a crowd you can purchase it for just a few dollars at any Sonic location.

However, this cocktail recipe is perfectly fine served over ice cubes.

Can I substitute sugar for simple syrup in cocktails?

No, simple syrup is used in cocktails because cold alcohol will prevent the sugar crystals from dissolving. Unless a recipe specifically calls for sugar or it is a blended drink, stick with the syrup.

What is the difference between a Smash and a Julep?

Essentially, the Smash is a type of Julep cocktail. The smash has the addition of fruit whereas a Julep just has fresh herbs, typically mint.

What can I use to muddle the fruit if I don't have a muddler?

You can use a wooden spoon or the end of a french rolling pin.

My name is Jen and I am the recipe developer, writer, and photographer around here. Since being diagnosed with celiac disease over 10 years ago I have been slowly curating a recipe box full of gluten-free goodness. I adore vegetables, crave chocolate, and I am always up for an adventure.